Section A has 24 questions. Attempt any 20 questions.

Section B has 24 questions. Attempt any 20 questions.

Section has 12 questions. Attempt any 10 questions.

There is no negative marking.

Section – A consists of 24 questions. Attempt any 20 questions from this section. The first attempted 20 questions would be evaluated.

1. The structure of bilobed anther consists of

2. In the figure of anatropous ovule given below, choose the correct option for the characteristic distribution of cells within the typical embryo sac 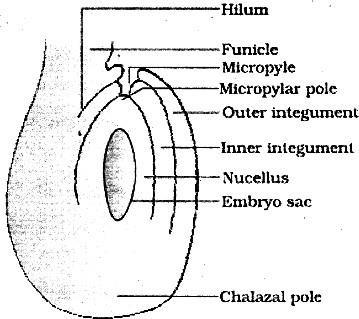 3. The coconut water from tender coconut is

C. both cellular and nuclear endosperm.

4. Pollen grains are well preserved as fossils because of presence of

5. Which of the following statements are true related to Seed $mathrm{X}$ and $mathrm{Y} ?$

(i) Seed $mathrm{X}$ is dicot and endospermic or albuminous.

6. Which of the following statements are correct with respect to hormones secreted by placenta?

(i) Placenta secretes relaxin during later stage of pregnancy.

7. Figure A shows the front view of the human female reproductive system and Figure B shows the development of a fertilized human egg cell 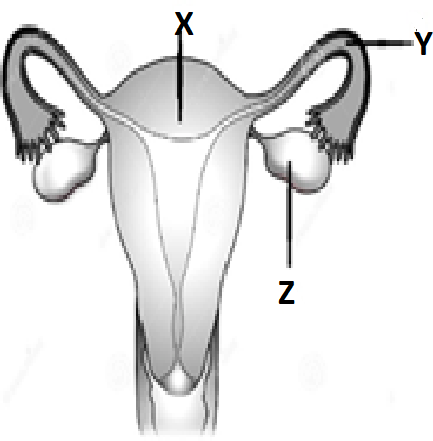 Identify the correct stage of development of human embryo (Figure B) that takes place at the site $X, Y$ and $Z$ respectively in the human female reproductive system (Figure A). Choose the correct option from the table below:

8. Penetration of the sperm in the ovum is followed by

A. formation of first polar body.

B. completion of meiosis II.

9. The correct sequence of hormone secretion from beginning of menstruation is

10. In the dioecious aquatic plant shown, identify the characteristics of the male flowers that reach the female flowers for pollination: 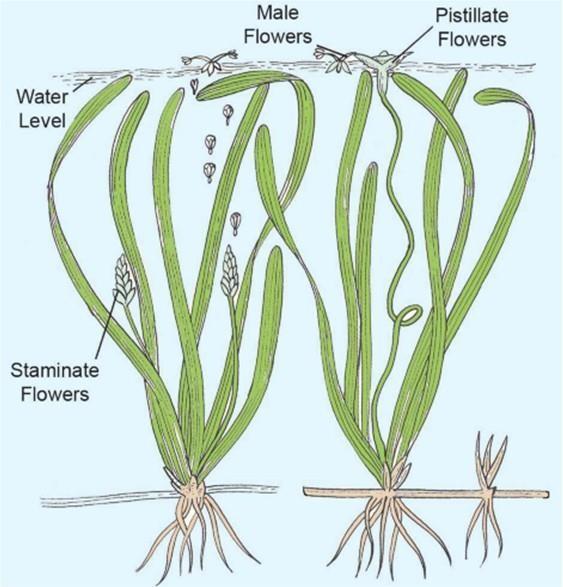 11. The thalamus contributes to the fruit formation in

12. How many types of gametes would be produced if the genotype of a parent is $mathrm{AaBB}$?

13. Which of the following statements indicates parallelism in genes and chromosomes?

(i) They occur in pairs

(ii) They segregate during gamete formation

14. Which of the following amino acid substitution is responsible for causing sickle cell anemia?

A. Valine is substituted by Glutamic acid in the $alpha$ globin chain at the sixth position

B. Valine is substituted by Glutamic acid in the $beta$ globin chain at seventh position

C. Glutamic acid is substituted by Valine in the $alpha$ globin chain at the sixth position

D. Glutamic acid is substituted by Valine in the $beta$ globin chain at the sixth position

A. Pleiotropy and codominance

B. Pleiotropy and incomplete dominance

16. Which of the following combination of chromosome numbers represents the correct sex determination pattern in honeybees?

17. Rajesh and Mahesh have defective haemoglobin due to genetic disorders. Rajesh has too few globin molecules while Mahesh has incorrectly functioning globin molecules. Identify the disorder they are suffering from.

18. Which of the following criteria must a molecule fulfil to act as a genetic material?

(i) It should not be able to generate its replica

(ii) It should chemically and structurally be stable

(iii) It should not allow slow mutation

19. The promoter site and the terminator site for transcription are located at

A. $3^{prime}$ (downstream) end and $5^{prime}$ (upstream) end, respectively of the transcription unit

B. $5^{prime}$ (upstream) end and $3^{prime}$ (downstream) end, respectively of the transcription unit

C. the $5^{prime}$ (upstream) end of the transcription unit

D. the $3^{prime}$ (downstream) end of the transcription unit

20. Which of the following is correct about mature RNA in eukaryotes?

A. Exons and introns do not appear in the mature RNA.

B. Exons appear, but introns do not appear in the mature RNA.

C. Introns appear, but exons do not appear in the mature RNA.

D. Both exons and introns appear in the mature RNA.

21. In E.coli, the lac operon gets switched on when

A. lactose is present, and it binds to the repressor.

B. repressor binds to operator.

D. lactose is present, and it binds to RNA polymerase.

22. Oswald Avery, Colin MacLeod and Maclyn McCarty used enzymes to purify biochemicals such as proteins, DNA and RNA from the heat-killed $mathrm{S}$ cells to see which ones could transform live $mathrm{R}$ cells into $mathrm{S}$ cells in Griffith’s experiment. They observed that

A. Proteases and RNases affected transformation. 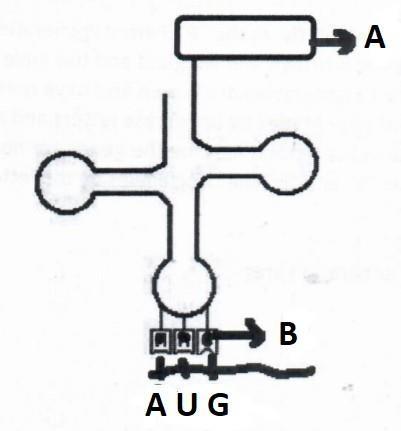 AUG on the mRNA will result in the activation of which of the following RNA having correct combination of amino acids:

24. Short stretches of DNA used to identify complementary sequence in a sample are called

Section – B consists of 24 questions (SI. No. 25 to 48 ). Attempt any 20 questions from this section. The first attempted 20 questions would be evaluated.

Answer these questions selecting the appropriate option given below:

25. Assertion: Lactational amenorrhea is the natural method of contraception.

Reason: It increases the phagocytosis of sperm.

Reason: It is a “once a week” pill with very few side effects.

27. Assertion: Parturition is induced by a complex neuro endocrine mechanism.

Reason: At the end of gestation period, the maternal pituitary releases prolactin which causes uterine contractions.

28. Assertion: When the two genes in a dihybrid cross are situated on the same chromosome, the proportion of parental gene combinations is much higher than nonparental type.

Reason: Higher parental gene combinations can be attributed to crossing over between two genes.

29. Concentration of which of the following substances will decrease in the maternal blood as it flows from embryo to placenta through the umbilical cord? 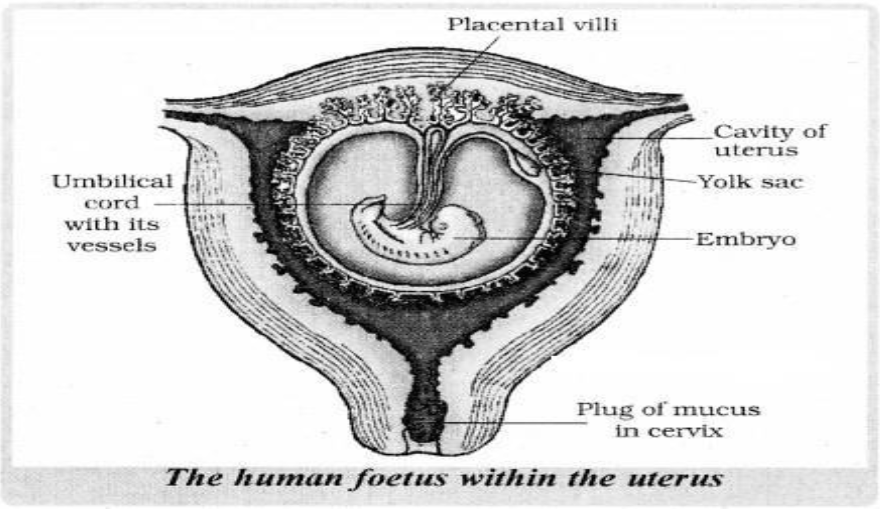 A. antipodal, zygote and endosperm

B. zygote, nucellus and endosperm

31. A botanist studying Viola (common pansy) noticed that one of the two flower types withered and developed no further due to some unfavorable condition, but the other flower type on the same plant survived and it resulted in an assured seed set. Which of the following will be correct?

A. The flower type which survived is Cleistogamous and it always exhibits autogamy

B. The flower type which survived is Chasmogamous and it always exhibits geitonogamy.

C. The flower type which survived is Cleistogamous and it exhibits both autogamy and geitonogamy.

D. The flower type which survived is Chasmogamous and it never exhibits autogamy.

32. During parturition, a pregnant woman is having prolonged labour pains and child birth has to be fastened. It is advisable to administer a hormone that can

A. increase the metabolic rate.

B. release glucose in the blood.

33. A female undergoing IVF treatment has blocked fallopian tubes. The technique by which the embryo with more than 8 blastomeres will be transferred into the female for further development is

34. The mode of action of the copper ions in an IUD is to

A. increase the movement of sperms.

B. decrease the movement of the sperms.

D. make the cervix hostile to the sperms.

35. To produce $400$ seeds, the number of meiotic divisions required will be

37. In Antirrhinum, $mathrm{RR} is phenotypically red flowers, $mathrm{rr} is white and $mathrm{Rr} is pink. Select the correct phenotypic ratio in $mathrm{F} 1$ generation when a cross is performed between $mathrm{RR} times mathrm{Rr}$ :

38. What would be the genotype of the parents if the offspring have the phenotypes in $1: 1$ proportion?

39. What is the pa
ttern of inheritance in the above pedigree chart?

40. A couple has two daughters. What is the probability that the third child will also be a female?

Applying Chargaff’s rule, what conclusion can be drawn?

A. It is a double stranded circular DNA.

B. It is a single stranded DNA.

C. It is a single stranded DNA coiled on Histones.

D. It is a double stranded linear DNA.

43. A stretch of an euchromatin has 200 nucleosomes. How many bp will there be in the stretch and what would be the length of the typical euchromatin?

44. Observe structures A and B given below. Which of the following statements are correct? 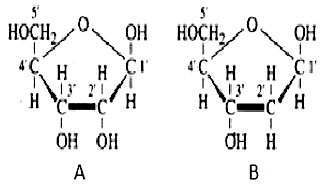 C. $mathrm{A}$ and $mathrm{B}$ both have -mathrm{OH}$ groups which make it more reactive and structurally stable.

D. $mathrm{A}$ and $mathrm{B}$ both are having -mathrm{OH}$ groups which make it less reactive and structurally stable.

B. Short coding repetitive region on the eukaryotic genome

D. Regions of coding strands of the DNA

48. There was a mix-up at the hospital after a fire accident in the nursery division. Which of these children belong to the parents? 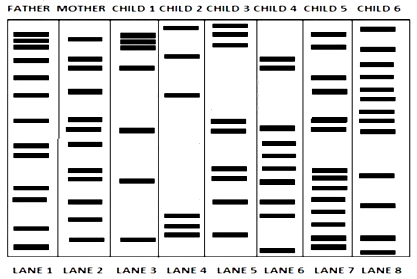 A. All of the children

Section-C consists of one case followed by 6 questions linked to this case (Q.No. 49 to 54). Besides this, 6 more questions are given. Attempt any 10 questions in this section. The first attempted 10 questions would be evaluated

Case : To answer the questions, study the graphs below for Subject 1 and 2 showing different levels of certain hormones.

51. If the peak of Hormone $mathrm{A}$ does not appear in the study for Subject 1, which of the following statement is true?

A. Peak of Hormone $mathrm{B}$ will be observed at a higher point in the graph

B. Peak of Hormone $mathrm{B}$ will be observed at a point lower than what is given in the graph

C. There will be no observed data for Hormone $mathrm{B}$

D. The graph for Hormone $mathrm{B}$ will be a sharp rise followed by a plateau

52. Which structure in the ovary will remain functional in subject 2?

53. For subject 2 it is observed that the peak for hormone B has reached the plateau stage. After approximately how much time will the curve for hormone B descend?

54. Which of the following statements is true about the subjects?

A. Subject 1 is pregnant

B. Subject 2 is pregnant

C. Both subject 1 and 2 are pregnant

D. Both subject 1 and 2 are not pregnant

56. Placed below is a karyotype of a human being.

On the basis of this karyotype, which of the following conclusions can be drawn:

B. Person is suffering from Colour Blindness

C. Affected individual is a female with Down’s syndrome

D. Affected individual is a female with Turner’s syndrome

57. Given below is a dihybrid cross performed on Drosophila. 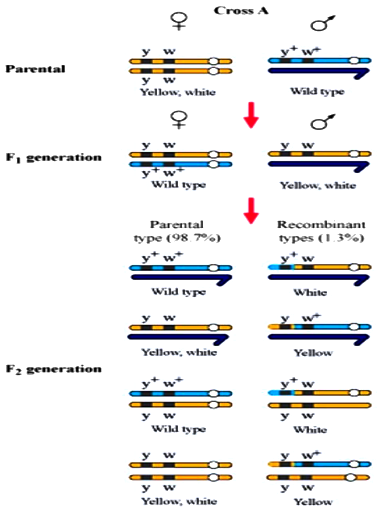 58. Which cellular process is shown below? 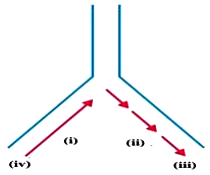 60. Transcription unit is represented in the diagram given below.

Identify site (i), factor (ii) and Enzyme (iii) responsible for carrying out the process.